Real-life stories of children using sign language to communicate with their parents (several months) before they learned to talk!

Read their stories below… “One of my favorite stories is when my son Noah was 10-11 months old and was having a hard time sleeping. One night I was up massaging his legs in the dark, when I stopped for a moment, I saw him doing the sign for ‘MORE’… It was the first time he did the sign (I had been trying to teach him the ‘MORE’ sign for food, milk and other things). So, I was blown away to see him use the sign for ‘MORE’ for the first time. Very tired and teary-eyed that my boy was connecting with me, loving the massage and asking his mama for MORE with sign language! It was amazing.” “We never really had that ‘terrible two’ phase…”

“I used sign language with my daughter starting when she was born, and she started signing back by 6 months old. Simple things at first like ‘MILK’, ‘FOOD’ or ‘MORE’. By 9 months she could sign sentences, and we never really had that ‘terrible two’s’ phase because she could almost always communicate her needs to use by using words she could say or sign. I kept a journal of all the signs she knew and was amazed by how much she had learned so quickly! She even ended up being in two episodes of ‘Baby Signing Time’ when she was 2. She is 6 now and continues to be a fast learner and reads at a level much higher then the rest of her classmates.” “One day my son Curtis (14 months old) came to me when I was folding laundry and signed ‘HELP’. He wasn’t holding anything so I didn’t know what he needed help with. I said ‘show mommy’ (which has become a very helpful phrase in our house), and he took me to the living room where his friend Lincoln (12 months old) had his hand stuck in a firetruck window! How cute is that ?! Up until then, he only used his signs to ‘get’ something he wanted. I was impressed my son could tell me his friend needed help” 🙂 “I started signing with my son when he was 6 months old. At 9 months he started signing back, and his first sign was ‘DIAPER’ + he started telling me he was ‘going’. He was potty trained very early and never sat in a wet diaper. The entire experience was great! By 12 months he had about twenty signs and then he started making them up and was stringing two and three together in sentences by 16 months. He had about ninety signs in all and he was making new ones every day. He differentiated between asking for Cheerios and asking for raisins. When he started talking he started right in with full sentences and then dropped the signing immediately.

Adults were (and still are) blown away by how articulate he is and how comfortable he is communicating with adults. Which for me was the biggest takeaway. I worried way less than my other mommy friends did about sending him to child care or out with a friend or relative because I knew he could communicate with them and express his needs.
This allowed him to have a lot of amazing experiences with other people and form early bonds with people in my community. We didn’t make a big deal out of it and acted like it was normal and he followed suit.” “Everyone always comments on how well my son communicates…”

“My son has special needs and I bought baby sign DVD’s before he was born. We used them since birth and he is doing amazing with his communication skills. Everyone always comments on how well my son communicates and also how much he is interested in learning and reading books.” “My niece felt heard and understood…”

“We used sign language with my niece, and it was such a great way to communicate and have her feel heard and understood.”

“We signed (and still sign) with both our kids (now 3.5 yrs + 2 yrs). They are both incredibly verbal, which people remark on all the time. I attribute so much of it to signing with them. It also really helped to bridge their understanding between their two spoken languages (Japanese and English). I kept a journal of how many signs they knew and both kids were signing close to 100 words before they were 15 months old. Just today I picked them up from preschool and on of the teachers asked “what does this mean?” and started tapping the thumb of her open hand on her chin (the sign for MOM). I told here, and it turns out that my daughter was signing it when she woke up from her nap and was looking for me. I’m sort of surprised that we still use it as much as we do, but we all love it and find it a really fun way to communicate with each other. I recommend baby sign language to all the new parents I know!”

“My son became much calmer…”

“I taught my younger son a few signs at 15 months because he wasn’t talking yet and was soooo frustrated with his inability to communicate. He picked it up very quickly, ‘modified’ a few of the signs and make them his own. He also became much calmer.”

“I started signing with my son when he was 6 months old and it was very helpful with meals and bedtime. He could easily express his needs without knowing the words. His verbal skills didn’t explode until after his second birthday, but I wasn’t worried about his development because his comprehension was present (he knew over 60 signs) and communicated well. He is now 3 1/2 yrs and still likes to go through the baby signs app on my phone and learn more signs. My daughter (14 months) had little interest in learning signing except for the basics and was ready for verbal words at 9 months. It is awesome that ‘baby’ sign language is actually sign language. This is a skill that my son + I will always have. I highly recommend every parent give it a shot as increasing communication. And understanding your baby is always a great thing!”

“Because she is learning ASL, we have laid the foundation for her to pick it up as a second language…”

“We took a class when our daughter was a few months old and signed with her every day. By 10 months she was signing ‘MORE’, + ‘MILK’. By 1 year she could sign words like ‘TRAIN’, ‘SWING’, ‘BUBBLES’, ‘DOG’, ‘BALL’ and much more! Now she is 14 months and everyone marvels at how well she can communicate, especially when she signs ‘PLEASE’ and ‘THANK YOU’. And because she is learning real ASL, we have laid the foundation for her to pick it up as a second language.”

“It was so helpful when she was fussy…”

“We signed with my daughter when she was little. Her first sign was ‘MORE’. It was so helpful when she was fussy and was able to tell me she wanted milk, food or was sleepy. When she is playing + pretending to be a thirsty kitty, she signs ‘MILK’ because kitty’s can’t talk” 🙂 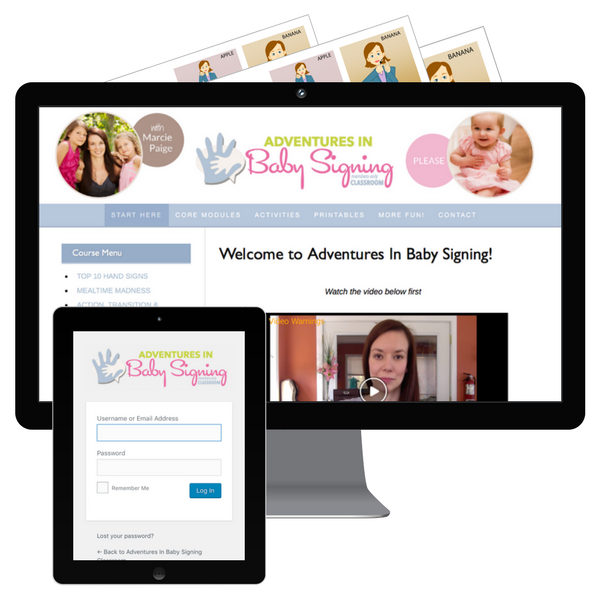